This year we are celebrating the Hubble Space Telescope’s 30 years in service of space, astronomy and advancement of science. Since the telescope was sent into orbit in 1990, it has taken images that have exceeded scientists’ expectations, baffled the public but also surpassed the ones produced by its ground-based rivals. After the series celebrating Hubble’s best images of galaxies, we wanted to commemorate the telescope’s most awe-inspiring pictures of nebulae.

A nebula is an interstellar cloud of dust and ionized gases like hydrogen or helium. It was originally used extensively in astronomy and early observations to describe any fuzzy and faint object in the night sky, including galaxies. Most nebulae are extremely vast in size, extending up to hundreds of light-years for the biggest observable ones. Unlike a star or a galaxy, which light can be very bright, nebulae have this particularity of being faint. A star would appear more and more luminous as it draws towards us but a nebula would not.

For example the Orion nebula, located in the constellation Orion, is the brightest nebula in the night sky. Like the Andromeda galaxy, it appears to the naked eye as a fuzzy patch glowing in the distance on a moonless night. The dim light of a nebula can come from two main sources. In some instances, the bright light of nearby stars illuminates the surrounding clouds: the reflection nebulae. In other cases, the gases are being excited by more energetic electromagnetic radiations like UV from newly-born stars, making them glow in the dark by dissipation of energy: the emission nebulae.

We curated a series of explanatory images of nebulae taken by the Hubble Space Telescope during its 30 years of operation. The goal is to not only show you the wondrous colors and shapes these fluorescent space clouds can take but it is also the occasion to explain to you how they are formed and how they contribute to star formation in the universe. 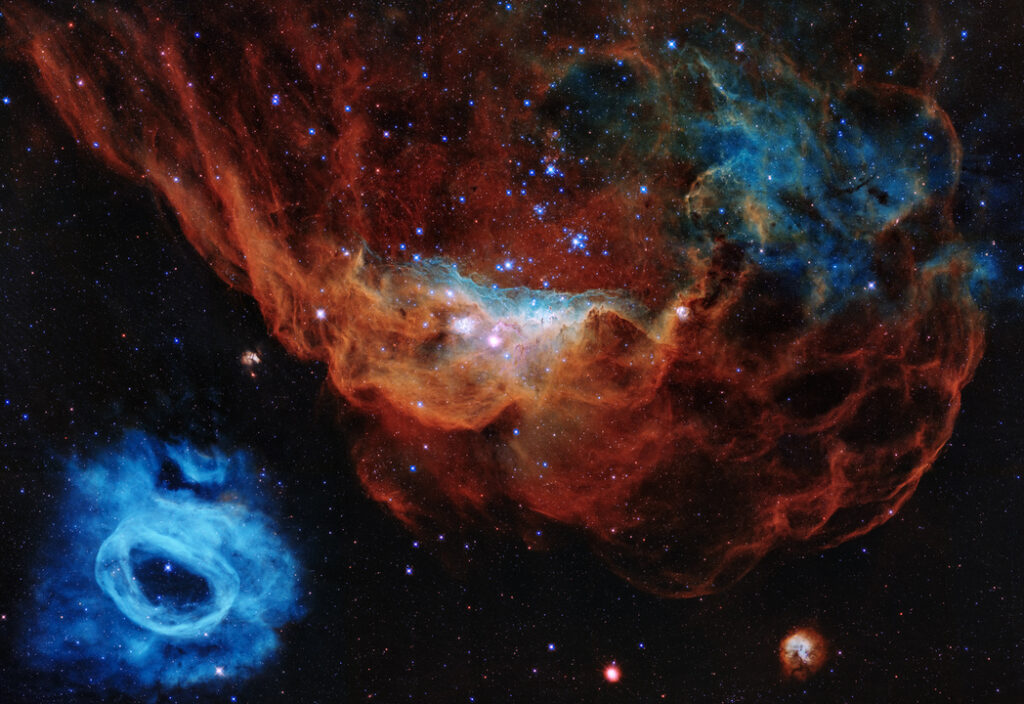 This image is actually one of Hubble’s most recent as it was released on April 24 2020. It was dubbed ‘cosmic reef’ because of specific nebulas’ shape and color make them look like an underwater world.

It portrays the giant red NGC 2014 nebula and its smaller blue neighbor, the NGC 2020 nebula. These stunning nebulae are both located in vast star-forming region of the Large Magellanic Cloud (LMC), a satellite galaxy of the milky way, located some 163,000 light-years away.

NASA writes: ‘The sparkling centerpiece of NGC 2014 is a grouping of bright, hefty stars, each 10 to 20 times more massive than our Sun. The stars’ ultraviolet radiation heats the surrounding dense gas. The massive stars also unleash fierce winds of charged particles that blast away lower-density gas, forming the bubble-like structures seen on the right, which resemble coral. The stars’ powerful stellar winds are pushing gas and dust to the denser left side of the nebula, where it is piling up, creating a series of dark ridges bathed in starlight. The blue areas in NGC 2014 reveal the glow of oxygen, heated to nearly 20,000 degrees Fahrenheit by the blast of ultraviolet light. The cooler, red gas indicates the presence of hydrogen and nitrogen.’

Conversely, the NGC 2020 in the lower left corner was formed by the relentless gas-spewing actions of a giant star 200,000 times the size of our Sun. The blue gas was ejected by the star through a series of eruptive events causing it to lose part of its envelop.

An eye for an eye…

In this incredible image released in 2013, the Hubble Space Telescope did not actually capture an eye, but a visible-light view of the ring nebula, located 2000 light-years away from our planet in the constellation Lyra.

The ring nebula is a well-known object as it faces us directly to describe an the shape of an eye or a football. It ranks among planetary nebulae, which are the glowing remains of Sun-like stars. At the end of their lives, these stars collapse on themselves, rebound and expand slowly in a gentle cosmic explosion. What’s left are a nebula, which glowing gases keep expanding outwards, and a tiny white dot at the center called a white dwarf. The white dwarf is visible here at the center of the ring nebula as the remains of the star’s hot core.

NASA writes: ‘The Hubble observations reveal that the nebula’s shape is more complicated than astronomers thought. The blue gas in the nebula’s center is actually a football-shaped structure that pierces the red doughnut-shaped material. Hubble also uncovers the detailed structure of the dark, irregular knots of dense gas embedded along the inner rim of the ring. The knots look like spokes in a bicycle.’ 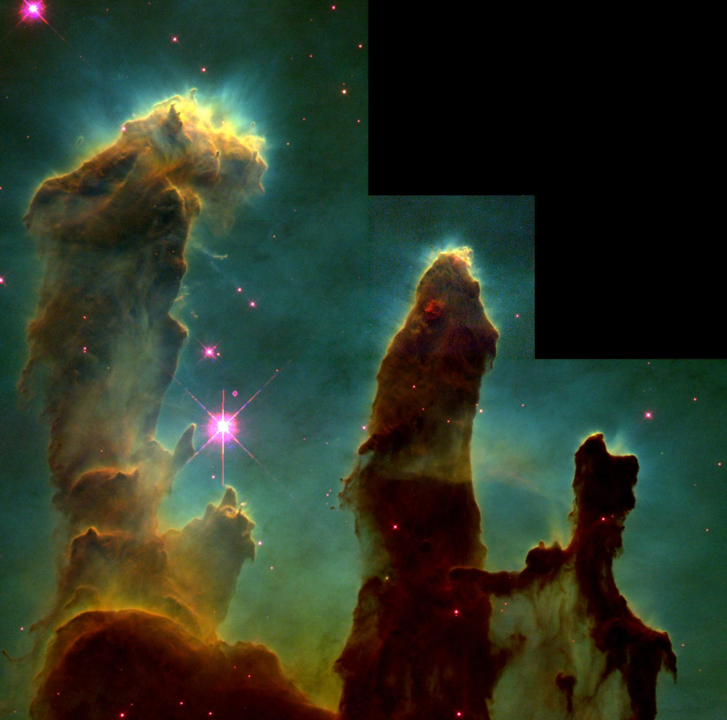 One of the images that made Hubble famous and paved the way for the understanding of star-forming processes is undoubtedly this one.  In 1995, Hubble produced this mosaic showing one of the deep regions of the Eagle nebula (M16 or Messier object 16) located some 6500 light-years away in the constellation Serpens. It was named ‘the pillars of creation’ because of the eerie finger-like columns of cool interstellar hydrogen gas. These pillars look like they are oozing upwards from the inner walls of a molecular gas like stalagmites in a cave.

NASA writes: ‘The pillars are in some ways akin to buttes in the desert, where basalt and other dense rock have protected a region from erosion, while the surrounding landscape has been worn away over millennia. In this celestial case, it is especially dense clouds of molecular hydrogen gas (two atoms of hydrogen in each molecule) and dust that have survived longer than their surroundings in the face of a flood of ultraviolet light from hot, massive newborn stars (off the top edge of the picture). This process is called “photoevaporation. “This ultraviolet light is also responsible for illuminating the convoluted surfaces of the columns and the ghostly streamers of gas boiling away from their surfaces, producing the dramatic visual effects that highlight the three-dimensional nature of the clouds. The tallest pillar (left) is about about 4 light-years long from base to tip.’

Orion is amongst the most famous and recognizable constellations in the night sky. At its sword, the Orion nebula is also one of the only naked-eye-visible nebulae. M42 is a diffuse nebula 23 light-years across and located at 1300 light-years away from Earth.

This multicolored image is sharpest ever taken of Orion at this focal length. The Advanced Camera for Surveys (ACS) instrument on board Hubble was able to capture the dramatic view of the shell-like structure of the Orion nebula teeming with thousands of newly-born stars. The picture itself features nearly 3000 visible stars. 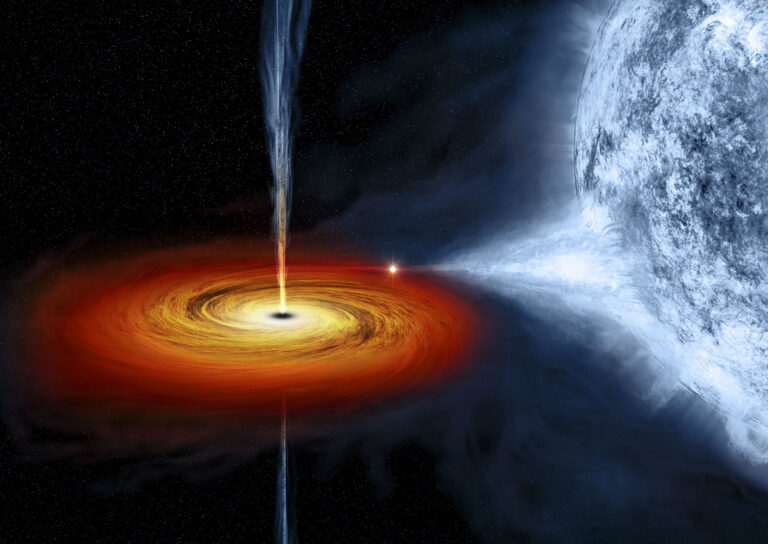 Closest Black Hole to Earth: Black holes are one of the most mysterious objects out in space and something that captures the imagination of 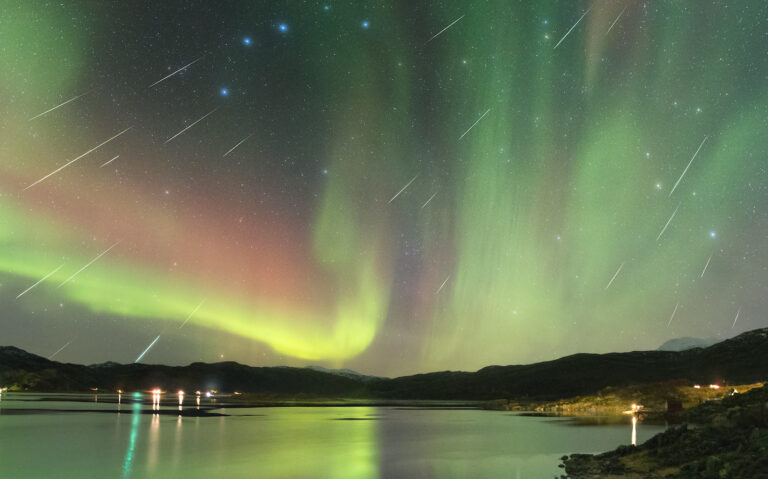 Incredible Geminid meteor shower 2020 seen through the aurora was out of this world. Aurora and shooting stars made perfection